Can't get enough of a good thing. 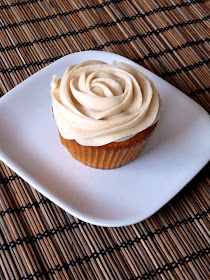 This past week two of my co-workers had the same birthday. I always like to bring in something for a birthday so it was a matter of what to make. I am not sure why I bothered asking since I knew what the answer was going to be, but I still asked my co-worker Daniel what he would like me to make. His only response "pumpkin". Daniel is in rotation from Mexico City and had never been exposed to pumpkin as a dessert prior to I made Brown Butter Pumpkin Cupcakes with Cinnamon Cream Cheese Frosting back in November. Apparently those cupcakes were all he needed to fall in love with pumpkin. He is always asking me to make more things with pumpkin.; since I am also an avid pumpkin lover I don't mind the requests. I hate to repeat recipes on this blog, but the Brown Butter Pumpkin Cupcakes with Cinnamon Cream Cheese Frosting were so fantastic I had to make them again. This time I decided to make a different frosting so you would at least have a new frosting recipe. This frosting is delicious!!! It complements the pumpkin and spices in the cupcake so well, but is just as good straight from the bowl. I think it would also be great with a spice cake or carrot cake.

Just in case you were wondering last year I made them these Personalized Cupcakes.

Preheat oven to 325 degrees Fahrenheit. Line muffin tins with paper liners. In a saucepan, melt the butter over medium-low heat and continue to cook, swirling occasionally, until butter turns golden brown, Skim foam from top, and remove from heat. Pour into a bowl to stop the cooking, leaving any burned sediment behind; let cool.

Whisk together flour, baking powder, salt, cinnamon, nutmeg, and cloves. In another bowl, whisk together the pumpkin puree, both sugars, eggs, and brown-butter mixture. Add the flour mixture, and whisk until just combined.

Beat butter and cream cheese with a mixer on medium-high speed until fluffy, 2 to 3 minutes. Reduce speed to low. Add sugar, 1 cup at a time, and then cinnamon and vanilla; mix until smooth. 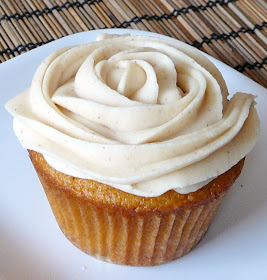